This week’s live action remake of “Beauty and the Beast” features a character who is gay, leading to some complaints, some controversy, and one theater refusing to show the film. I applaud Disney for the way they have created the character and think the film is entirely suitable for family viewing.

In what way is the character gay? The character is LeFou, played by Josh Gad (Olaf from “Frozen”). He is a sort of sidekick/henchman to the film’s villain Gaston. Making him gay just means he has something of a gently suggested crush on Gaston, which makes his character more sympathetic and his loyalty more understandable.

At the end of the film, we see him dancing with a female character and then briefly with another male character. That male character seems happy when magically put in a dress — for just a second or two.

That’s it. There is nothing explicit or sexual about the portrayal.

Why is it important to have gay characters in movies for families? Families should see characters who reflect the diversity of the world around us. Children need to see the people they know portrayed in the media. Most kids will not even notice whether LeFou is gay or not, but kids who have gay friends or family members or whose classmates may have gay parents or siblings or who may think they may be gay themselves may find it reassuring to see a gay character appreciated and happy.

What should I say if my child asks about the character or the controversy? “Some boys like girls and some boys like boys.” “Some people are uncomfortable about others being gay because they don’t understand it, but fortunately, stories like this help us see how gay people are cherished members of our community in movies like they are in the world.” “There are other gay characters in stories, too, like Dumbledore.” And “I’m always happy to hear your thoughts and try to answer your questions.”

“When We Rise” was written and created by Academy Award-winning screenwriter Dustin Lance Black. This mini-series event chronicles the real-life personal and political struggles, setbacks and triumphs of a diverse family of LGBT men and women who helped pioneer one of the last legs of the U.S. Civil Rights movement, from its turbulent infancy in the 20th century to the once unfathomable successes of today. Starring in the mini-series are Guy Pearce (“Memento,” “L.A. Confidential”) as LGBT activist Cleve Jones, Mary-Louise Parker (“Weeds,” “Angels in America”) as women’s rights leader Roma Guy, Rachel Griffiths (“Brothers and Sisters,” “Six Feet Under”) as her wife, social justice activist Diane, Michael K. Williams (“Boardwalk Empire,””The Wire”) as African-American community organizer Ken Jones and Ivory Aquino as transgender-activist Cecilia Chung.

Related Tags:
Based on a true story GLBTQ and Diversity Television 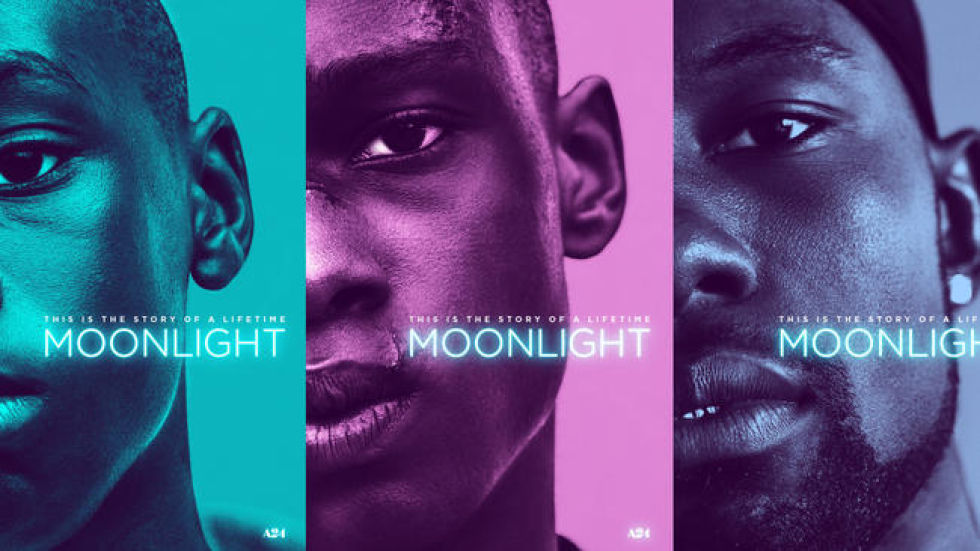 In the 2017 Oscar winner for Best Picture, a man tells a young boy a story, and, as with many stories adults tell children, especially in movies, it is a story with a purpose. Juan (Mahershala Ali) tells the boy derisively known as “Little” (Alex Hibbert) that when he was young, a woman saw him at night and told him that the silvery moonlight made his dark skin looked blue. She said he should be called Blue from then on. But, he tells Little, he wasn’t. “At some point you gotta decide for yourself who you gonna be. Can’t let nobody make that decision for you.”

In “Moonlight,” a film of a delicate, shimmering beauty that measures up to the title, the boy will struggle to make that decision for himself. Three chapters, as a child, a teenager and a young man, played by three different actors, are labeled with three different names that he is called: the taunting nickname Little, his birth certificate name Chiron (played by Ashton Sanders), and the nickname given to him by someone who had a profound impact on him, Black (played by Trevante Rhodes). Who will he decide to be?

The story begins in the Liberty City neighborhood of Miami. Little runs from bullies and hides out in a crack house, where he is discovered by Juan, a kind-hearted drug dealer. Little won’t talk, so Juan takes him home, where his warmhearted significant other, Teresa (singer Janelle Monae) gives little some food and lets him stay the night. The next day, Juan brings Little back to his mother, Paula (Naomie Harris), a nurse who loves Little but leaves him alone much of the time. “He can take care of hisself. He good like that.”

In the second section, he is a skinny teenager all but abandoned by his mother, who has become addicted to drugs, and bullied at school. He still does not talk much, but he has one friend, Kevin (Jharrel Jerome), who calls him Black. Chiron cannot even acknowledge to himself that he wants more from Kevin, but one night on the beach, they share a piercingly sweet moment of tenderness that will indirectly lead to an act of violence.

When we see him again, he is a man, with an armor of muscle and gold teeth grillz, still almost silent, still almost isolated. But a call from Kevin inspires a journey.

The film is based on a play called “In Moonlight Black Boys Look Blue” by McArthur awardee Tarell Alvin McCraney, who worked with director Barry Jenkins (the lovely romance “Medicine for Melancholy”) on adapting it for the screen. Both McCraney and Jenkins, like Little, had mothers who struggled with addiction, and Jenkins grew up on the Liberty City setting of the film.

The small miracle of the movie is the way it subverts the expectations the audience has based on news reports and many, many other movies. Every character is authentically complex. The graceful, poetic score by composer Nicholas Britell gives the story epic scope and heartbreaking intimacy.

We see Juan’s kindness and wisdom as he holds Little gently in the ocean, teaching him to swim and, more important, giving him an idea of what a man can be. We hear his thoughtful answer when Little asks him what “faggot” means. And yet, when Paula wants drugs, Juan supplies them, even knowing what it will do to Little. The confident, capable Kevin casually mentions time in prison as though it was an inevitable rite of passage. Little/Chiron/Black is physically transformed from chapter to chapter. We are continually challenged and confounded, yet held close to the heart of the story by its romantic lyricism and, most of all, the spacious humanity of its love for its characters.

Family discussion: Why does the main character have a different name in each chapter? What do you think happened to Juan? 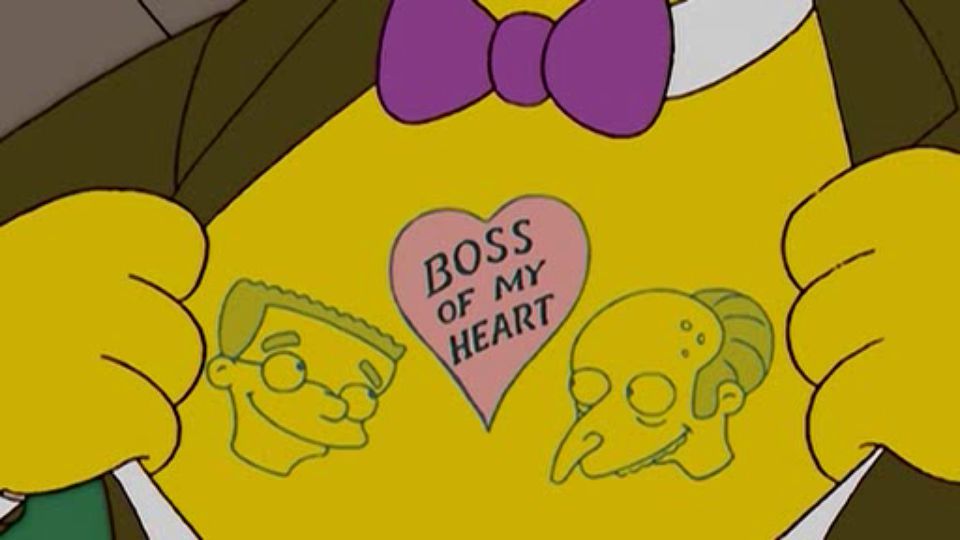 Coming Out on The Simpsons — Inspired by the Writer’s Son

Tonight’s episode of “The Simpsons” was inspired by writer Rob LaZebnik’s son, who is gay. There have been indications over the years that Waylon Smithers, the loyal assistant to Homer’s boss Mr. Burns, is gay. The New York Post reports that the episode is inspired by the son of the man who wrote it.

Smithers is coming out tonight but fans of the series will not be surprised.

When Waylon Smithers Jr. finally comes out Sunday night after 27 years in the closet on “The Simpsons,” he won’t be the only one celebrating.

Longtime show writer Rob LaZebnik tells The Post he penned the episode in support of his own 21-year-old son, Johnny, who is gay.

“I am a Midwestern guy, so I don’t tend to wear my emotions on my sleeve, but I thought, ‘What better way to tell my son I love him than to write a cartoon about it?’ ” says Rob.

Related Tags:
Behind the Scenes GLBTQ and Diversity Television Writers 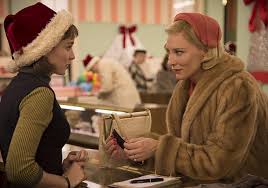 The most romantic movie of the year is “Carol,” based on a novel by Patricia Highsmith, the author of Strangers on a Train and The Talented Mr. Ripley. But Carol

, her second novel, was originally published under another title and under another name. It was semi-autobiographical, it was the story of a lesbian relationship, and, unlike the rest of the very limited literature about lesbians at the time, it was not a tragic story. It was almost four decades before Highsmith acknowledged that she was the author.

There is some irony, then, in the idea that this film, depicting a story that was so controversial in the repressed “love that dare not speak its name” mid-century time when it was written is for that very reason ideally suited to depict a romance that is so rich and resonant. Now, when writers complain about how difficult it is to come up with believable ways to keep their characters from having sex in the first act (Stephenie Meyer had to make her male character a vampire for that reason in the Twilight series), making this love affair doubly forbidden by making the couple both women in the conformist 1950’s is the ultimate depiction of the anxious giddiness of being on the brink of falling in love.

This is all gorgeously portrayed in every detail on the screen. Director Todd Haynes, working with an outstanding team of designers and director of photography Edward Lachman tells the story with each setting and camera angle and the flawless performances of the two lead actors, Cate Blanchett in the title role as a wealthy woman in the midst of a divorce and Rooney Mara as Therese, a young shopgirl and would-be photographer.

The intricacy, the precision, and the delicacy of the storytelling allows us to experience the relationship along with the two women. It wisely avoids the usual lazy shortcuts to indicate attraction: the “You love this obscure thing? I love the same obscure thing!” conversation or the montage over a pop song. Instead, the conversational topics are mundane and the responses are not especially witty or incisive. But what we see is that they are good enough for Therese and Carol, and that pulls us in.

Haynes skillfully makes sure that the relationship never seems predatory, even though Carol is older, sophisticated, and wealthy and Therese is young, inexperienced, and vulnerable. Therese herself admits she is so unsure of herself she can hardly figure out what to order for lunch. Haynes and his stars never allow the relationship to seem anything but equally chosen. Even a scene where Carol tries out some make-up on Therese avoids the usual “makeover” trope. When she tells Therese to touch the perfume to her pulse points, we can feel both sets of pulses flutter. The dialogue is often oblique, but its meaning is always true-hearted.

Parents should know that this film includes sexual references and an explicit situation, nudity, some strong language, drinking, smoking, and discussions of divorce, adultery, and custody.

Family discussion: What do we learn from the questions Therese asked Richard? How does this movie illustrate what one character calls the difference between what people say and what they really feel?

If you like this, try: “Far from Heaven” and “Strangers on a Train”

Related Tags:
Based on a book GLBTQ and Diversity Romance