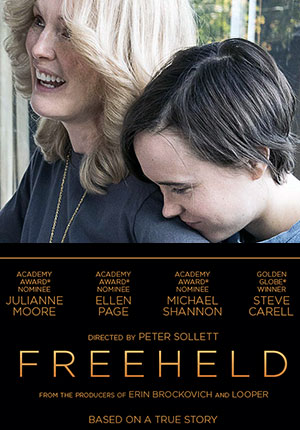 Laurel Hester (Julianne Moore), a 23-year veteran of the police force, learns that she has terminal cancer. And then she learns something even more devastating — that her registered domestic partner, Stacie Andree (Ellen Page) is not eligible for the pension benefits that she would be entitled to if they had been a heterosexual married couple.

It is hard to believe that was only ten years ago. But in 2006, marriage equality seemed very far in the future. And that was not Laurel Hester’s concern. As shown in the Oscar-winning documentary short, also called “Freeheld,” she did not want her fight for death benefits to be used to promote marriage equality. Hester was a very private person who did not even tell her longtime detective partner (Michael Shannon) that she was gay. She just wanted what she believed she had earned, and she wanted the woman she loved to be able to stay in the home they created together.

The term “Freehold,” by the way, is unique to New Jersey, and it goes back to the state’s earliest history. New Jersey’s first constitution, written in 1776, declared a county representative must be worth “fifty pounds proclamation money, clear estate in the same and have resided in the county in which they claim a vote for twelve months immediately preceding the election.” “Clear estate” means owning a property outright, and is also called a “freehold,” so only those who owned land could vote or be elected to office. While that restriction no longer applies, the position most localities call “representative,” “supervisor,” or “councilman” is referred to in New Jersey as “Freehold.” In the case of this movie, “freeheld” refers to the property shared by Hester and Andree and their love for each other as well.

There are really two stories here, both familiar to moviegoers, but not combined in this way. There is the story of the fight for justice against the barriers of bureaucracy, bigotry, and bullies. And there is the story of a reserved loner opening up to love. The combination is at times uneasy. The love story is the stronger part of the film, but gets less attention. Moore is superb as Hester, with her Farrah Fawcett hair wings, utter dedication to her job, and resolve built up into isolation after more than two decades of mostly good-natured but sexist and homophobic humor from her fellow cops. She crosses state lines to play in on a lesbian volleyball team in Pennsylvania so no one in New Jersey will see her.

And then she meets Stacie, tiny, much younger, but confident in who she is and who she loves. The scene where Andree proves herself to the manager of a car repair shop is a highlight. And so is their date, where we see Hester’s conflicting feelings. She is very attracted to Andree, she cannot quite believe Andree is attracted to her, she wants love in her life, she does not want to be exposed or vulnerable. When the two of them walk away from the bar to talk quietly, they are approached by thugs, and Hester pulls out her gun and identifies herself as a police officer. It is, in a way, a supremely romantic gesture. Later, she introduces Andree as her “roommate” and barks at her for answering the phone. But when she gets sick, she understands quickly what her priorities need to be.

She remains clear, even after Steven Goldstein (Steve Carell), a flamboyant activist for gay rights, shows up. Hester reluctantly allows him to create some political theater to support her cause. There is a loophole in the law. Domestic partners of state employees are covered, but local Freeholders decide whether city and county-level employees will qualify. Hester’s Freeholders have already turned her down and she does not have much time.

As often happens in re-telling a recent true story, the movie trips over the proportions in trying to get the facts straight. The interactions between the various Freeholders, including Josh Charles as the most inclined to support Hester’s rights, are no more interesting than municipal-level politics usually are. But the deep love between Hester and Andree and their quiet insistence on simple justice give the story sincerity, sweetness, and conviction.

Parents should know that this film includes very sad scenes of a terminal cancer patient, and death, themes of LGBTQ rights including homophobic and bigoted characters, some sexual references and situations, some strong language, smoking, drinking, and some law enforcement-related violence.

Family discussion: Why did Laurel insist that she was not an advocate of marriage equality? Should she have told her partner the truth?

If you like this, try: the Oscar-winning documentary that inspired the film

Related Tags:
Based on a true story GLBTQ and Diversity 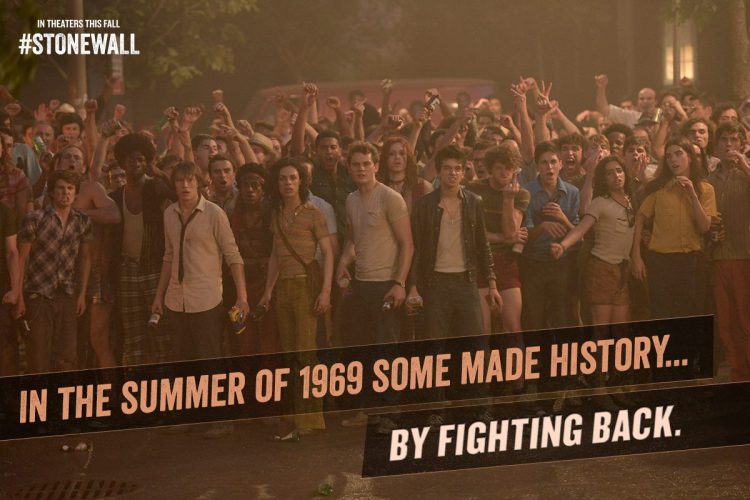 In 1969, when the federal government prohibited the firing of gays and lesbians, when it was illegal for them to congregate in a bar or even to have consensual sex, when police harassment and brutality was not only permitted but expected, a man threw a brick, shattered a window, and began four days of riots that galvanized the fight for GLBTQ equality. The window was in a bar called Stonewall, and its name lives on as the symbol of the moment that ignited a revolution.

The movie “Stonewall,” intended as history and tribute, instead throws a brick through the meaning and the moment, shattering both. This movie is more than bad and worse than disappointing. It is a tragic distortion of a vitally important story that insults the people it tries to honor and insults its audience as well. Director Roland Emmerich (known for movies with a lot of big explosions and stunts) and screenwriter Jon Robin Baitz so vastly underestimate their audience that they apparently believe cannot understand a movie about the GLBTQ community unless we have an all-American-style high school football hero from the heartland to identify with. How do you make a movie about the Stonewall uprising and so completely miss the point?

Our point of entry is handsome but bland Danny (Jeremy Irvine), a Hoosier who has a crush on the quarterback. He is Goldilocks to the three bears of his family, spread out to represent all points on the gay-friendliness spectrum: a taciturn father (also his football coach), a passive mother, and a devoted and free-thinking younger sister (Joey King). When his assignations with the quarterback are discovered, “faggot” is scrawled on his locker and he is shunned by everyone. He refuses to tell his father that it was a one-time thing and leaves for New York.

And so we shift from tone-deaf cliches about the Midwest to tone-deaf cliches about Christopher Street, with a group of adorably scruffy and flamboyant runaway Lost Boys who spend their time tricking and clubbing. Their leader is an Artful Dodger type known as Ray (Jonny Beauchamp). They sit on the stoop and talk about Judy Garland, alternately enjoying shocking decadence and longing for home. Around the edges of the story are the real-life characters who are far more interesting, or at least who were in real life.

This is a bad movie, purely from the standpoint of drama. It is poorly constructed, with cardboard characters and worst-of-the-year category clangers in dialog, provoking snicker and then outright snorts from the audience. “I’m too angry to love.” “These kids have nothing to lose.” But the monumental failure here is the disrespect for the real-life courageous souls who fought back nearly half a century ago and for the audience, who would relish a film that does them justice.

Parents should know that this film has explicit sexual references and situations, including predatory behavior, abuse, and prostitution, homophobic and bigoted insults, police brutality, and riots. Characters use very strong language, drink and smoke, and use drugs.

Family discussion: How was the gay rights movie like and not like other civil rights movements of the 20th century?

If you like this, try: “Longtime Companion.” “Pride,” and “Milk”

Eddie Redmayne and Alicia Vikander star in “The Danish Girl,” directed by Tom Hooper (“The King’s Speech”). It is the true story of transgender pioneer Lili Elbe and the artist Gerda Wegener who was first his wife and then her partner and advocate.

Related Tags:
Based on a true story GLBTQ and Diversity Trailers, Previews, and Clips

New Report: Same Disappointing Results on Diversity on Film and in the Film Industry

A new study from USC’s Annenberg School for Communications and Journalism documents the vastly over-proportionate portrayals of white males on film and in filmmaking. Their review of 700 top-grossing films from 2007-2014 found:

Race/Ethnicity. Of those characters coded for race/ethnicity across 100 top films of 2014, 73.1% were White, 4.9% were Hispanic/Latino, 12.5% were Black, 5.3% were Asian, 2.9% were Middle Eastern, <1% were American Indian/Alaskan Native or Native Hawaiian/Pacific Islander, and 1.2% were from “other” racial and/or ethnic groupings. This represents no change in the portrayal of apparent race/ethnicity from 2007‐2014.

LGBT. Across 4,610 speaking characters in the 100 top films of 2014, only 19 were Lesbian, Gay or Bisexual. Not one Transgender character was portrayed. Ten characters were coded as Gay, 4 were Lesbian, and 5 were Bisexual. Only 14 movies sample wide featured an LGB depiction and none of those films were animated. Of the LGB characters coded, nearly two‐thirds were male (63.2%) and only 36.8% were female. LGB characters were also predominantly White (84.2%). Only 15.8% were from underrepresented racial/ethnic backgrounds.

Behind the scenes is even worse.

The landscape of popular cinema in 2014 remains skewed and stereotypical. Across 700 films and over 30,000 speaking characters from 2007 to present, movies continue to distort the demographic reality of their audience. Film characters are overwhelmingly White and male, despite both population statistics and viewing patterns.

Employment trends behind the camera evidence a similar dearth of diversity. Only five Black directors helmed top movies in 2014, and women were underrepresented by a factor of 5.3 to 1 as directors, writers, and producers in 2014. Further, the 100 top films of 2014 featured no Asian directors. Despite activism, attention, and statements about addressing the issue, Hollywood’s default setting for characters and content creators remains fixed on “status quo.”