Memorial Day on PBS: Of Men and War

Post-traumatic stress disorder, or PTSD, affects almost 30 percent of the 834,467 Iraq and Afghanistan War veterans treated through the U.S. Department of Veterans Affairs. Consumed by anger and traumatic memories long after their return, soldiers often resort to drugs or suicide to end their suffering.

Filmmaker Laurent Bécue-Renard provides a searing account of how the disorder has affected veterans and their families in Of Men and War. The film offers an unparalleled look at the enduring consequences of PTSD and the role treatment can play in helping soldiers reclaim their lives. An Official Selection of the 2014 Cannes Film Festival, the documentary has its national broadcast premiere during the 29th season of POV (Point of View) on Memorial Day, Monday, May 30, 2016 at 10 p.m. on PBS. (Check local listings.)

Of Men and War, made between 2003 and 2014, begins with a scenic drive through California’s Napa Valley, where therapist and social worker Fred Gusman, who pioneered revolutionary PTSD programs at the Veterans Administration in the late 1970s, opened The Pathway Home residential treatment center in Yountville in 2008. The beauty of the surroundings stands in stark contrast to the intense inner turmoil suffered by the veterans arriving by van.

Bécue-Renard filmed the servicemen speaking for the first time about their experiences. Survival in a war zone required a hardened attitude—“Rage and anger carried me through everything,” says one veteran—accompanied by alienation even from those in their units. “He was there and then he was gone,” a soldier says of a friend killed during their deployment together in Iraq. “It’s hard being close to anybody because you know they’re going to leave any time.” These attitudes did not disappear when combat tours ended.

“The return to civilian life is not what they thought it would be,” says Gusman, Pathway’s lead therapist. One veteran says that he “woke up mad” and “took things out” on loved ones. “When you come back you feel like you should have died over there. It would have been a hell of a lot easier to just fall down over there and not get back up.” Something as ordinary as driving can cause severe distress; in the combat zone, a soldier explains, an approaching vehicle was always seen as potentially carrying a bomb. That fear returns if a car pulls too close to his in traffic.

The war resurfaces in nightmares and panic attacks. A sudden noise might trigger a flashback. Other times, all it takes is a disagreement with a spouse or an ambiguous look from a stranger. Then the groundswell takes over—all that was buried from the war boils up, and the veteran lashes out. “The day I came home from Iraq was the last time I saw my daughter,” says one soldier. “I was given a restraining order.”

The film underscores another problem: Seeking help for PTSD can be a difficult step to take. “What we have is embarrassing,” a soldier says. It makes him feel “small” and “defective.” Wives and girlfriends often feel helpless. “I’m scared he’s going to give up trying,” says one.

Bécue-Renard says his camera performed a significant role in the soldiers’ therapy. “They came to perceive the filming itself as an additional glimmer of hope. Consciously or not, the veterans began to sense that voicing their brutal experiences might uncover deeper meaning: Their stories might contribute to a greater public consciousness of the hardships veterans confront long after the war’s end.”

Of Men and War shows that for many veterans, recovery will be a lengthy process. Although therapists cite the necessity of forgiveness, one soldier, who killed a colleague by mistake, responds, “I think it would be really selfish for me to learn to forgive myself.”

“Of Men and War came out of a reflection on what was left unspoken by my grandfathers,” says Bécue-Renard. “They had died by the time I was born—but they had also staunchly refused to talk about their experiences from the First World War while they were alive. Of Men and War is my way of honoring them.

“It took 11 years between my first idea for the film—when the Iraq war began in 2003—and its completion in May 2014. I spent 14 months in the therapy center and returned many times in the four years that followed. Filming therapy was a way of acknowledging people who had decided to move forward with their lives. Some days I’d leave the therapy room overwhelmed. How was I to make sense out of this mess? How could I communicate it to an audience? I became convinced that from all this mud, I could eke out rays of light. In doing so, I could find meaning for the protagonists in Of Men and War as well as for its viewers.”

And yet the phrase uses — “Then the problem is you” — feels both wrong and unfair. Because the problem is not just Jeanie. It’s also an entire community who wants to “save Ferris” when he isn’t even in peril and doesn’t notice that Jeanie — and other marginalized kids like her — need attention too. Maybe Hughes wasn’t trying to slyly satirize a society that always gives white guys the advantages and the benefit of the doubt, but man, it really is hard to watch Ferris Bueller’s Day Off 30 years later and not see it that way.

From Anthony Trollope and “Downton Abbey’s” Julian Fellowes, “Dr. Thorne” is the story of a poor girl born out of wedlock who loves and is loved by the son of the local landed gentry. He is under pressure from his family to marry money, as the estate has been heavily borrowed against. There are glorious costumes and settings and Trollope’s witty and generous take on the class, money, and political conflicts of the era. I was completely captivated by it, especially by the lovely Stephanie Martini in the lead role as Mary Thorne and Tom Hollander as the title character, her uncle and guardian. 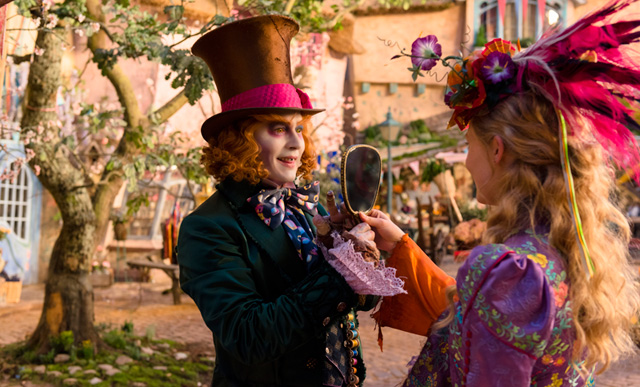 Alice Through the Looking Glass

“Alice Through the Looking Glass” the movie has almost no relationship to Alice Through the Looking Glass, the book by Lewis Carroll in spirit, character, or storyline. That might possibly be all right if the spirit, character, or storyline were in any way worthwhile, but it is not. Gorgeous production design and some cool stunts do not make up for a story that begins as passable and ends as painful.

Tim Burton, who produced this one, previously gave us an “Alice in Wonderland” with an adult Alice (Mia Wasikowska) replacing the little girl of the story and spending way too much time in the above-ground “real” world as she attends a party, turns down a proposal of marriage from the odious Haimish (Leo Bill), and accepts instead the offer from his father to serve as crew on a merchant ship.

In “Looking Glass,” we first see Alice, now captain of the ship, in an exciting escape from pirates that show us her courage and love of adventure. But when the ship returns to port in London, she finds that Hamish’s father has died, leaving him in charge, and he refuses to let her go back to sea. In his home, she finds a mirror over a fireplace that is a portal back to Wonderland, led by the former caterpillar, now-butterfly (voice of of the much-missed Alan Rickman).

Having already imported the talking flowers, chess pieces, Tweedledum and Tweedledee, and the Jabberwocky from “Through the Looking Glass” into the first film, conflating the first story’s Queen of Hearts (the “Off with the head!” one) with the second story’s Red Queen (the chess one) this movie takes — but makes no use of — the first book’s characters like the Cheshire Cat and the White Rabbit, and then has a completely invented story about time travel.

This has many disagreeable aspects, but the worst is when it puts Sasha Baron Cohen as the embodiment of Time into a scene with Johnny Depp as the Mad Hatter and allows them to try to out-grotesque each other in a manner clearly intended to be charming. It is not.

Neither is the plot, which relies heavily on just the kind of treacly heartstrings-plucking backstories that Carroll would never have allowed, asking us to feel sympathy for outrageous behavior and affection for caricatures. The first film’s attempt to create a warm, devoted friendship between Alice and the Mad Hatter was rather ooky. In the sequel, we are asked to believe that she has returned to do whatever it takes to help him because they love each other so much.

To paraphrase the folks behind “Seinfeld,” in the Alice world, there should be no hugging and no apologizing — and no heartfelt professions of affection, especially when they are not in any way justified by the characters’ history with each other.

Alice is needed on the other side of the mirror because the Mad Hatter has found something that has convinced him that his family is still alive, and not killed by the Jabberwock as he had thought. Why is this so important? Is it because he misses them so? Not really. It is because he feels bad about his behavior and needs to see them again so he can be forgiven. The disconnect between the expressions of devotion and the narcissistic reality of behavior is disturbingly cynical. Alice decides the only way she can save his family is to go back in time to the Jabberwock battle, which means she has to retrieve the chronosphere from Time himself, and that leads to more time travel as she solves various not-very-mysterious mysteries and Time chases her to get it back. Not that any of it makes any sense, logically or emotionally.

The production design is imaginative and witty, but it is buried under a gormless, hyperactive mess of a film. The book is endlessly witty and imaginative and delightful with all kinds of wordplay, math puzzles, and chess references from Carroll (aka Charles Dodgson), a math professor.  The movie wastes all of that opportunity.  Look at the title — the movie should be about a reverse world, not a heist/time travel saga that only concludes you can’t change history.  If I had the chronosphere, I’d use it to go back to the moment I sat down to watch this movie so I could go home.

Parents should know that this film has extended fantasy peril with many disturbing images, discussion of loss of parents, brief image of someone dying, and bullying.

Family discussion: If you could go back in time, what time would you pick? Why did the Hatter and the White Queen have a hard time telling their families how they felt?

If you like this, try: the many other movie Alice stories including the Disney animated version and the Kate Beckinsale version of “Through the Looking Glass” and the books by Lewis Carroll