One of “Moana’s” highlights is this buoyant song from Maui (Dwayne Johnson), bragging about all he did to create the world. You can see the hand-drawn animation of the tattoos, including mini-Maui, and the tapa paper effect Mark Henn talked about in our interview. 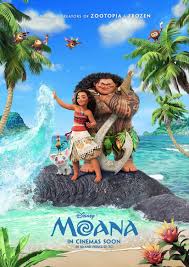 Disney has kept the best of its reliable formula and freshened it up with a spirited story inspired by the ancient myths of the Pacific Islands and a spirited heroine who dreams of adventure, not finding a prince. It is gorgeously animated, heartwarming, exciting, and slyly self-aware. At one point a character notes that if she has a dress and an animal sidekick, she must be a princess. And in a scene way at the end of the credits (stay ALL the way to the end), a character re-appears to compare himself to another well-known animated Disney character. But it is also utterly sincere in its affection for the heroine and her quest.

Moana (Auli’i Cravalho) lives on an Polynesian island paradise. Her father is the king and she will someday be the community’s leader. She has the run of the island, and loves the shore. She has the heart of an explorer, but her parents tell her that their people do not go beyond the reef because it is not safe out on the ocean. They do their best to warn her, but there is nothing that can stop Moana’s curiosity and sense of adventure, even after an initial voyage goes badly. Moana wants to know what happened to the courageous voyagers who once led expeditions from her island led by wayfarers who navigated with the stars. The ocean itself invites her to explore.

When an environmental disaster strikes, Moana realizes that the rules have to change. Her people will be wiped out unless she can return the heart that was stolen from Te Fiti, the goddess who created the world. Her heart, a pounamu stone, was stolen by the mischief-maker Maui (Dwayne Johnson), and the destruction that created has reached Moana’s island. Moana needs to find Maui and return the heart, before all of the island’s plants and fish turn to ashes.

Moana finds Maui, but he does not want to help, he has lost the stone, and Te Fiti broke the magical fishhook that is the source of most of his power. Without a working fishhook, his ability to shapeshift is badly compromised, leading to some hilarious misfires (watch quickly for one of his mistaken personas, a character from “Frozen”). Johnson’s ebullience is perfect for Maui, reminiscent of Robin Williams as the genie in “Aladdin,” with his mercurial personas and helpful but trickster role. He is covered with Maori-style tattoos which delightfully interact with him, a mini-movie of their own.

The two of them go on a journey filled with adventure and with great songs from “Hamilton’s” Lin-Manuel Miranda and Opetaia Foa’i. Highlights include Maui’s riotous “You’re Welcome,” as he explains all that he has given mankind (inspired by Maori creation myths) and “Shiny,” performed by Jemaine Clement as a treasure-loving giant crab. Moana is an appealing heroine, brave, smart, determined and devoted to her community. She is even devoted to her animal sidekick, a scrawny chicken with very little brainpower.

The animation is spectacular, with the ocean a character of its own, pygmy pirates, the giant crab, and a lava monster. And the resolution is especially satisfying, with not just redemption and triumph for our heroes and justice, compassion, and forgiveness rather than demonization of the character who would otherwise be the typical villain. The loveable characters, hummable songs, and heartwarming and joyful conclusion make this a holiday season treat for the whole family.

NOTE: Stay all the way to the end of the credits for an extra scene. And be sure to get there in time for the adorable animated short before the film, “Inner Workings,” a sort of variation of “Inside Out,” as we see a man’s internal organs responding to the world around him and enticing him to transcend his daily drudgery with a visit to the beach. It was directed by veteran Disney animator Leo Matsuda.

Family discussion: Why didn’t the ocean return the heart itself? What did Moana learn from Maui’s story about his parents?

If you like this, try: “Whale Rider,” “Brave,” and “Mulan” — and try navigating without GPS

There’s something for everyone in this 2016 movie gift guide!

TCM has the largest selection of DVDs and movie goodies anywhere. And the best gift any lover of classic movies can hope for this holiday season is a subscription to Filmstruck, a gorgeously curated selection of great films and great extras.

Fox Home Entertainment has some classics, too, including family favorites Miracle on 34th Street, A Christmas Carol (George c. Scott version), The Nutcracker, and The Sound of Music.

The best animated films of 2016 are available on DVD/Blu-Ray, Zootopia, Finding Dory, and Kubo and the Two Strings.

And some of the year’s best family fantasies are, too, including Pete’s Dragon, The Jungle Book, and The BFG.

Superheroes can be found in Captain America: Civil War and space explorers in Star Trek: Beyond (with a very cool gift set — and for the true completist Trekkers out there, the Roddenberry Vault has some cutting-room floor goodies).

For music-lovers, check out the terrific George Martin PBS series Soundbreaking, and go behind the scenes with more than 150 interviews, including Paul McCartney and Eric Clapton, or Dave Grohl’s Sonic Highways.

For sports fans, try Color Line of Scrimmage, a documentary about the 1950’s, segregation-era championship all African-American 1956 Burley High School team, not just undefeated, but un-scored on.

For anyone — check out the selection from The Great Courses. They are wonderful!

I love character actors — from the silent era through the present, they are some of my favorite performers. I’ve written about the outstanding documentaries, That Guy…Who Was in That Thing and That Gal…Who Was In That Thing, which show the dedication, talent, and frustration of roles where you have to provide all the exposition and you have to be perfect every time so they can use the one take where the star was at his or her best.

So I was delighted to find Brandon Hardesty’s “No Small Parts,” a web series devoted to these outstanding actors. Short versions appear on the Internet Movie Database, but the full-length episodes are really worth watching.

Still trying to figure out “Arrival?” These might help:

In the Washington Post, Michael O’Sullivan explains more about what a linguist does, with some comments from the woman who helped to inspire the character played by Amy Adams, Jessica Coon.

Linguists, Coons explains, aren’t so much glorified translators as they are theoreticians, more interested in the why of humankind’s natural affinity for language acquisition, when other species aren’t hard-wired for it.

In Entertainment Weekly, Darren Franich is one of the few people writing about the film to dismiss its aspirations of profundity.

There’s a phony core to Arrival, though, which emerges gradually and then suddenly. The film opens with the birth, life, and death of Banks’ daughter. The devastation of her loss haunts the film; mother-daughter scenes play through the movie. It seems like a character note, a clever bit of arc-setting: Banks, grieving the loss of her child, must now midwife our communication with an entirely new species. Perhaps you would say: Having cut herself off from humanity, she must now connect humanity to the stars. Or maybe not everything is plot-essential; maybe this is a movie daring enough to suggest that the characters have a life outside of the constraints of the movie.

But Arrival, turns out, is entirely a Plot Movie. Every character trait and hanging line of dialogue is hermetically sealed into the architecture of what amounts to a Big Twist. As Banks learns the aliens’ language, her consciousness comes unstuck in time. The daughter we’ve been seeing hasn’t even been born yet.