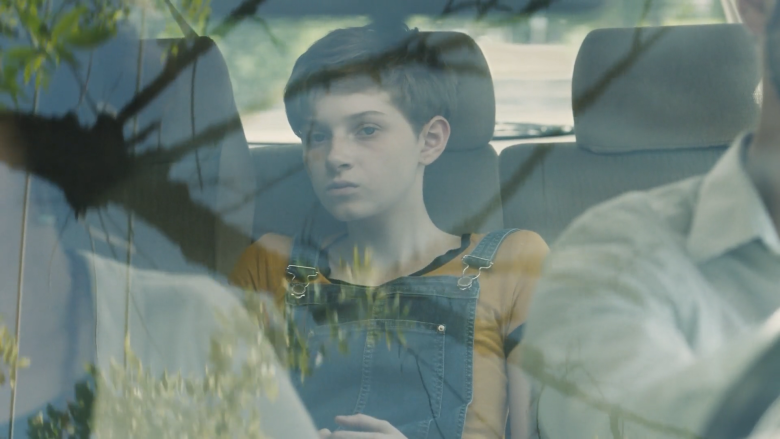 Trans kids generally know who they are, even when they are very young. They don’t tell their families they want to be a gender different from their body parts. They say they are that gender, and it is usually their families who have to reframe their understanding of the boy or girl they thought they had. Even the most certain of children and the most understanding and supportive of families face a wrenching challenge as the child approaches adolescence. Do you block puberty with medication to preserve the child’s choices about gender until age 18? Secondary sex characteristics for the wrong gender can be intensely traumatic. But the medication can have side effects.

“They” and “their” are the preferred pronouns for the lead character, known just as J, and played by a trans actor named Rhys Fehrenbacher. J is a young teenager who is having an adverse reaction to the puberty blockers and has to decide what to do. J’s parents are away caring for another family member, their return home delayed, and J’s brisk but not uncaring sister Lauren (Nicole Coffineau) and her Iranian boyfriend, Araz (Koohyar Hosseini) have come to stay with J until their parents return.

Writer/director Anahita Ghazvinizadeh gives the film a lyrical, meditative quality. J’s parents, sister, Araz, and doctor are all understanding and supportive, if distracted. They are all so accepting that no one seems to think J might need to talk about the momentous decisions they are confronting.

I do not mean to complain.
They say it is my fault.
Nobody tells me anything.
Tell me how old I am.

The deepest demarcations
can slowly spread and fade
like any blue tattoo.
I do not know my age.

We see many moments in nature, as though to locate J’s transitions within the context of the natural world. Lauren and Araz are both preoccupied with their own personal and professional liminal challenges as well. There is also a long, seemingly improvised section that takes place in the home of one of Araz’s relatives, with Lauren and J at a large family party. Throughout, it almost seems as though we are eavesdropping on bits and pieces of the J’s world.

That is not always successful, and some of the choices are heavy-handed. But thankfully, it is not didactic or preachy. J may not know what they want, but Ghazvinizadeh has confidence that they will make the right choice, and trusts us to root for them.

Parents should know that this movie deals obliquely but frankly with issues of non-binary gender.

Family discussion: How do the boys with the bicycle feel about J? What should J do?

If you like this, try: the “I am Jazz” series on television 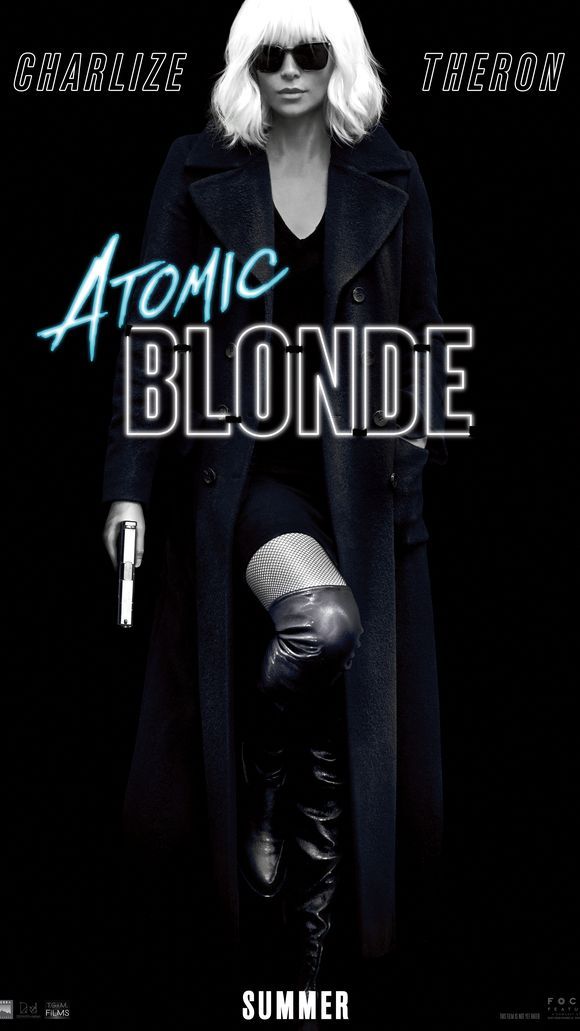 Win a copy of “Atomic Blonde,” one of 2017’s most intense action films, starring Charlize Theron and James McAvoy.

Send me an email at moviemom@moviemom.com with Atomic in the subject line and tell me your favorite spy story. Don’t forget your address! (US addresses only). I’ll pick a winner at random on May 1, 2018. 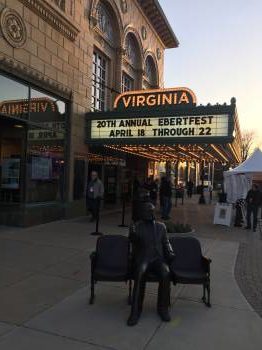 Twenty years ago, Champaign, Illinois native Roger Ebert began what was then called the “overlooked” film festival, following a very successful screening of “2001: A Space Odyssey” on the campus of the University of Illinois to celebrate the birth of the HAL computer. According to the film HAL began at the university on January 12, 1992, a date still far in the future when the film was released in 1968, now half a century ago.

Twenty years later and five years after the death of its beloved founder, the most influential movie critic of all time, Ebert’s widow Chaz has kept the film going very much in the spirit of the man who called movies “an empathy machine.” Unlike most festivals, where people dash around to stand in long lines in many different venues to see not-yet-released films and there is enormous pressure and competition to see the most and the best, the festival now lovingly termed Ebertfest has an extraordinary sense of community because only one film is shown at a time and everyone watches everything together in one of the grandest venues in the country, the magnificent Virginia Theater, with its enormous screen and impeccable projection (on film!) and audio.

It was an honor and a thrill to share the critics panel with so many people whose work I love and so many who have become my friends.

I especially enjoyed seeing three very different films on Saturday, all brilliantly done and all about fathers and daughters: “Interstellar,” “Selena,” and “Belle.” It was very moving to see the tributes to the “three queens of cinema,” Amma Asante (“Belle”), Julie Dash (“Daughters of the Dust”), and Ava DuVernay (“13th”). One of my favorite films of last year was “Columbus,” and it was even more dazzling on the 70-foot screen. I got a huge kick out of co-presenting this year’s silent film with live musical accompaniment from the Alloy Orchestra, a cherished Ebertfest tradition. The selection this year was the Japanese film, “A Page of Madness,” a challenging story written by Yasunari Kawabata, who would go on to become the first Japanese author to win the Nobel Prize for literature.

All of the panels, introductions, and Q&A sessions are available on YouTube. And be sure to read Chaz’s comments about the history and aspirations of the festival in Variety.

Jeff Dowd, who inspired “The Dude” character from “The Big Lebowski” said that it was Roger Ebert who really tied the room together. Ava DuVernay talked about the searing documentary “13th” — and about meeting “Mr. Thumbman,” Roger Ebert, when she was 8 years old. She teared up talking about his life-changing support for her first film, the one she made with the $50,000 she was saving to buy a house, including three reviews and 27 tweets. She also had a nice shout-out to Carrie Rickey, the other critic who championed the film, not knowing she was sitting in the audience. Also, there were dancing dinosaurs celebrating the festival’s 20th anniversary, because why not. On to the next 20! 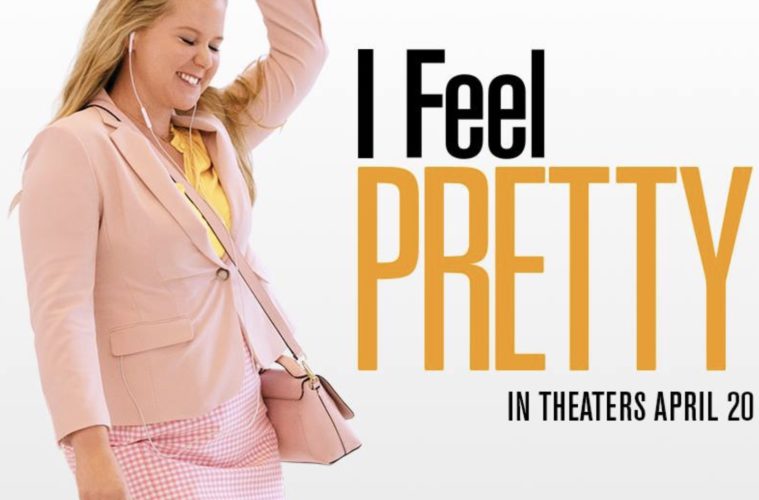 Amy Schumer shines in I Feel Pretty, an adorable fantasy that both draws from and slyly subverts the classic Cinderella story.

I’ve written before about the “makeover movie.” From the original Cinderella fairy tale to movies that range from “The Breakfast Club” to “Gigi” to “Clueless,” “Princess Diaries,” and “Now, Voyager.” There is something thrilling and akin to superheroic about the idea that a klutzy doof in glasses can be transformed into a capital B Beauty. And beauty has often been depicted as the primary power that a female character has, with an almost magical ability to control others, particularly men.  This is the story of someone who thinks she has had that makeover but everyone around her — including us — knows that she has not.

Renee (Schumer) desperately wishes she could be “undeniably pretty.” She works for a cosmetic company, where most of the employees look like — or are — supermodels. 1960’s real-life supermodel-turned-actress Lauren Hutton plays the company’s founder, and it is now run by her granddaughter, Avery (Michelle Williams). Renee is convinced that if she could just be conventionally beautiful she would have all of the love, attention, and fun she dreams of. When she meets a model (Emily Ratajkowski) she asks whether just walking off a plane in another country leads to an invitation to a fabulous trip on a yacht with beautiful and wealthy people, and the answer is, well, pretty much yes.

And then one day, Renee has a SoulCycle accident and hits her head badly. When she regains consciousness, somehow she sees herself as the beauty she always dreamed of being. She is immediately and irrepressibly confident, which leads her to apply for a more visible job as the company’s receptionist and to flirt with the guy in line behind her at the dry cleaner shop. Both are very successful. But she is less successful with those who knew and loved her as the “old” Renee, her best friends (Busy Phillips, married to the film’s co-writer/director, and Aidy Bryant).

I’m a bit mystified that this film has had some blowback from viewers who see it as exactly what it is opposing — a body-shaming underscoring of rigid standards of beauty.  On the contrary, this is the opposite of the makeover movie (including those listed above and many many others like “The Mirror Has Two Sides,” “Ash Wednesday,” “She’s All That,” and “Strictly Ballroom”), those films where a female character has to pretty up to be worthy of male attention.  Makeovers are to girl movies what origin stories are to boy movies — they reveal a transformational source of power.

This movie makes it clear that everyone — from the beauty industry itself to the standards of guys who use online dating sites to screen romantic prospects on the basis of looks to the snooty attendants at the gym who seem to think you have to have a perfect body to work out — is trying to meet standards that are (1) superficial and (2) impossible.  Some online commenters criticized the trailer for making fun of Schumer’s character for participating in the bikini contest.  But like her date and the guy who runs the bar, the movie expects us to be charmed by Renee’s pure pleasure in participating and feeling good about herself, and we are.

Characters in the film include a cosmetics executive who could be a supermodel who is insecure about her ability and her childlike voice and an actual model played by an actual supermodel (Emily Ratajkowski) who has her own reasons for low self-esteem.  It also makes it clear that confidence is itself an extremely attractive quality, as is consideration for and interest in others and competence on the job.  And when Renee herself briefly is almost swept away over a man’s good looks (and his confidence), she realizes that it is character that matters.  She learns that confidence in her looks can get her noticed, but being good at her job gets her respect.  She also has to learn that too much confidence can be a problem when her joy in her new persona makes her inconsiderate to her friends.

There are elements in this story of Tom Hanks’ “Big” (which Renee watches) and “Never Been Kissed” (by the same screenwriter), and of the traditional cautionary fairy tale that wishes never turn out the way you hope.

It is fresh, funny, and heartwarming, with a genuinely beautiful performance by Schumer, ably supported by Williams, Bryant, Phillips, and Scovel, with some real insights about confidence, class, and empathy and a sparkle of romantic comedy magic.

Parents should know that this film includes some comic peril and violence including accidents with some graphic images, some strong language, and sexual references and a non-explicit situation.

Family discussion: Where is the line between being confident and being obnoxious? Why did strangers appreciate Renee’s new attitude while her friends did not? What did Renee see when she looked in the mirror?

If you like this, try: “Shallow Hal” and “Pitch Perfect”

What Four Films Define You?

Filmstruck asked the Twitterverse: What four films define you? Check out all the great answers from filmmakers, actors, critics, and filmlovers.