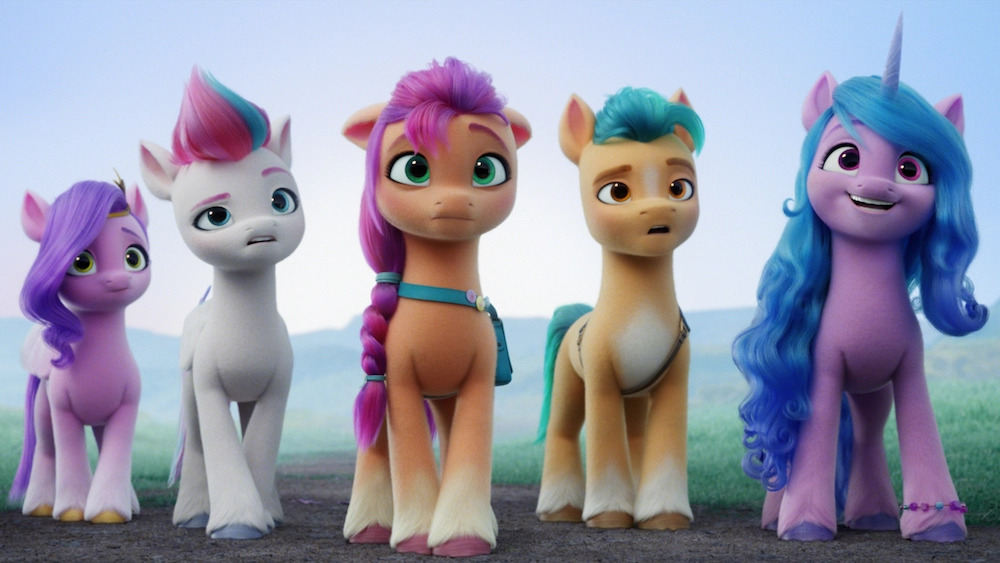 My Little Pony: A New Generation

B
“My Little Pony: A New Generation” follows in the tradition of previous media from the world of MLP: candy colors, poppy music, gentle humor, warm-hearted lessons about friendship, and basically a way to sell merchandise. We know where we are when it begins by reminding us that it is produced by Hasbro, a toy company.

The MLP toys could have been designed by algorithm to appeal to children. Like Pokemon, Paw Patrol, and boy bands, they are all about reassuring messages of friendship and teamwork. They have an assortment of cheery colors, and personalities — well, attributes — allowing a child to pick a favorite and collect them all. They have lots of hair to play with and style plus magical powers and problem-solving skill to spark fantasy play. I remember the bride MLP that lived with a child in our house for a while, white, with glittery hair, a hair brush, a veil, a big diamond ring that fit on her hoof, and no sign of (or need of) a groom, either stable groom or bridegroom. The MLP handlers know what kids like. Improbably, the “My Little Pony: Friendship is Magic” series was popular with college students for a while and somehow there were groups of adult male fans who called themselves “Bronies” and attend BronyCons. There is a documentary about them called “A Brony Tale.”

I prefer the flat, 2D-style animation to this movie’s 3D CGI modeling and some young fans may feel the same, but other than that it fits the algorithm nicely, with top talent providing the voices, catchy songs, and a sweet message of, no surprise, friendship.

In this iteration, the MLP have lost their magic and their friendship. The world has divided and the three groups — ponies, unicorns, and Pegasi have been taught to fear and consider themselves superior to each other, except for Sunny (Vanessa Hudgens) a brave little pony whose father taught her that all the different little horse creatures should be friends. When a unicorn named Izzy (Kimiko Glenn) comes to the area where the ponies live, everypony runs away. “Are we playing hide and seek?” she asks joyfully. But they are just scared, except for Sunny. Soon the pony and the unicorn team up to bring friendship and magic back to their world. It is cheerful and colorful and sweet as candy, with just a little bit of excitement and just enough problems to be solved with courage and teamwork.

Okay? We good? Anything else you’d like to know? Let me unpack some of the semiotics of this story for you. It is as much a sign of the unprecedented high sensitivities of our times as it is the content of the film, but the characters and messages of the film are likely to raise some parental eyebrows and perhaps some hackles as well. The pony children are all told lies in school about the unicorns and the Pegasi. The unicorns are told that the earth ponies are lazy, smell bad, and not very bight. Ponies are taught in school that the unicorns can read minds and fry ponies with laser beams from their horns. One of the parents is a war profiteer whose motto is “To be scared is to be prepared.” She dismisses calls for friendship and cooperation as “hugs and cupcakes.” Terrifying the ponies is good for her business. Another parent is a tyrannical ruler who lies to her people, telling them that she and her daughters have retained the magical powers the rest have lost. When she is found out she is derided as “phony pony full of baloney.” A law enforcement officer abuses his power. The only kind and loving adult is dead (subtly and off-screen, but absent and missed). Also, because this is 2021, one of the characters is a social media influencer, another is a hipster, and there is some hip-hop.

So, there’s a lot going on here for an animated movie about magical horse creatures. I am not sure whether this film is a reflection of the divisiveness of our times or a response to it. I do know that either way, despite the touchy times, no adults should feel criticized or diminished. Instead, they should recognize that the only message here is the real magic of trust, understanding, cooperation, and generosity.

Parents should know that this film includes some mild peril and references to bigotry, and subtle references to the loss of a parent. The adult characters are ineffectual, tyrannical or scaremongering.

Family discussion: When have you been a good friend? When have you learned that what you thought or feared turned out not to be true? How should the characters respond to the queen’s lie? How sneaky are you?

If you like this, try: the other “My Little Pony” movies and the television series — and the episode of “Wait Wait Don’t Tell Me” where special guest Bill Clinton aces an MLP quiz. 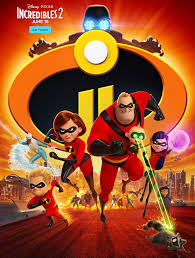 Brad Bird knows that all families are pretty incredible, and his movies about the family of superheroes reminds us that we know it, too. The writer/director of “The Incredibles” and this sequel, “Incredibles 2” (there’s a lot going on, so this title is streamlined and has no room for an extraneous “the”) took 14 years and it was worth the wait. We are glad to be back in the world of the super-family, though for many of us, our favorite character is still super-suit designer Edna Mode (voiced by Bird himself). Edna’s comment is really the theme of the film: “Parenting done right is really a heroic act.”

One of the best ideas in the original was giving each family member a heightened version of the real-life superpowers we see in all families. The dad is Bob, otherwise known as super-strong Mr. Incredible (Craig T. Nelson). Mom is Helen, who is always stretched in a million different directions, Elastigirl (Holly Hunter). The middle school daughter, Violet (Sarah Vowell) is invisible, because middle school is such a fraught time that many kids either think they are invisible or wish they were. And her younger brother is super-fast Dash (Huck Milner). There’s also a baby named Jack-Jack, who in the last film had not developed any superpowers yet, but in this sequel makes up for lost time with at least 17 of them.

We begin right where the first film left off. Even though they just saved the day, superheroes are still outlawed by a government that considers them too much of a risk. Violet has finally been noticed by the boy she likes. And a new super-villain, The Underminer, has attacked the town.

The Incredibles save the day, but it does not change the law. “Politicians don’t understand people who do good only because they think it right.” Even the secret government program to keep the superheroes saving the day is shut down.  The Incredible family has no place to go…until a pair of siblings who head up a huge corporation make them an offer.  They think they can persuade the government to change the law, but first Elastigirl — and only Elastigirl — will have to come with them.

The movie’s funniest moments come when Bob is left behind with the kids.  He may be able to lift a locomotive, but new math is an entirely different problem.  And Jack Jack’s new powers start popping out like jumping beans.  The concept of baby-proofing a house takes on a whole new meaning when it isn’t the baby you’re trying to protect. It’s the house that needs protection when a baby has laser beam eyes, invisibility, and a mode that can only be described as fire-breathing gorgon.  He may not be able to walk or talk yet, but a raccoon who won’t leave the yard will be very sorry about making that mistake.

Meanwhile, Elastigirl is happy to be using her powers again, but she misses her family, even when she gets a call about Dash’s missing shoes in the middle of a mission.  Of course a new villain is going to challenge the whole family, their old friend Frozone (Samuel L. Jackson) and a delightful new group of oddball superheroes. The action scenes are as thrillingly staged as all of the “Fast/Furious” films put together, the mid-century-inspired production design is sensationally sleek and space age, especially the house the Incredibles borrow. Some serious and timely issues are touched on lightly but meaningfully, including immigration, how to respond to laws you consider unfair, opting for “ease over quality” in consumer goods, and spending too much time on screens with not enough connection to people. The villain, once revealed, seems a bit patched together, however, as though there was some re-writing done over the 14-year gestation period that never got fully resolved. But there is plenty of comedy and lots of heart in a story that truly is incredible.  Please don’t make us wait until 14 years for the next one.

DVD Extras include concept art and a new feature about Edna Mode.

NOTE: Pixar continues its track record for making parents in the audience cry, this time even before the feature begins. The short cartoon before “Incredibles 2” is the story of a mom who just is not ready for her son to grow up and, I’m sorry, I must have something in my eye.

Parents should know that this movie includes an offscreen murder of a parent with a gun, extended action/superhero peril and violence, characters mesmerized and forced to obey, and brief mild language.

Coming to DVD, plus Digital, Digital HD and On Demand November 15 from Lionsgate: “Arlo the Burping Pig,” with Drake Bell as the voice of Arlo!

When David (Joey Lawrence of “Melissa & Joey”) moves his family to a new city, everyone’s thrilled — except seven-year-old Talia (Lindsey Blanchard). That is, until she meets sassy Arlo, who’s just escaped from the circus. Every time Arlo eats, he belches loudly — and everyone thinks it’s Talia who’s being rude! When the family’s found with a priceless, stolen Ming vase, things get even crazier. It co-stars Jennifer Taylor (“Two and a Half Men”) and Tracy Nelson (“Melrose Place”), and features the voice of Jonathan Lipnicki (“Jerry Maguire”).

The Dove Foundation says it is “A comical movie the whole family can enjoy.” I’m delighted to have a copy of this cute DVD to give away! Meatball is a carefree, wisecracking country dog. Cassie is Hollywood’s most pampered pet They couldn’t be more different, and when their owners marry and move the entire blended family to the rural north, the claws come out It’s only when two bumbling thieves scheme to break into their house, that these four-legged foes must team up to defend their home. This riotously funny and heartwarming comedy proves that it takes all breeds to make a family.

Send me an email at moviemom@moviemom.com with “Step Dogs” in the subject line and tell me your favorite pet. Don’t forget your address! I’ll pick a winner at random on December 18. Good luck!

Related Tags:
Contests and Giveaways For all ages