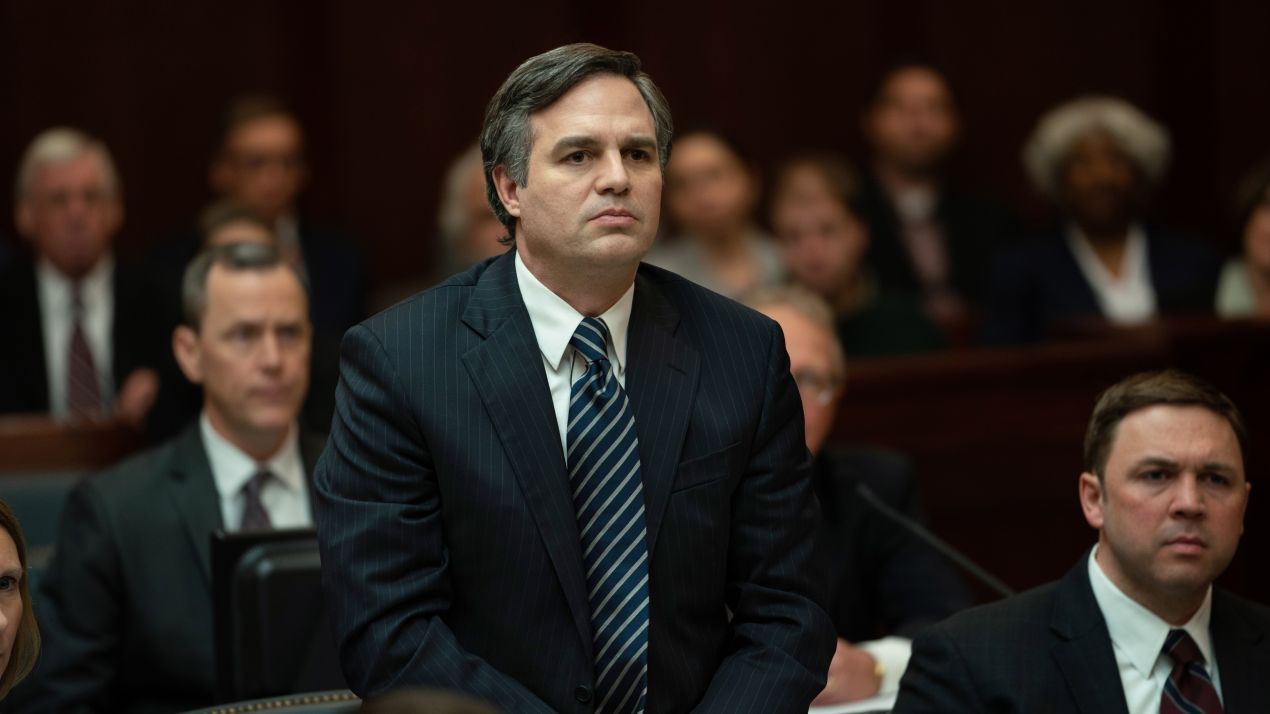 B
Imagine “Erin Brockovich” without the sizzle of the outspoken, miniskirted single mom with the biker boyfriend, and you’ve got “Dark Waters,” with Mark Ruffalo (who also produced) as real-life lawyer Rob Bilott, a lawyer who represented corporate polluters until a West Virginia farmer showed him what the chemicals were doing to his community. The movie is based on a New York Times article called The Lawyer Who Became Dupont’s Worst Nightmare by Nathanial Rich.

Bilott is pretty much the opposite of Erin Brockovich, a quiet, dedicated family man, so stable he is almost inert, who is comfortable representing corporations and thinks — not entirely wrongly — that he is one of the good guys because he is representing them in negotiations with EPA to use taxpayer-funded Superfund money to clean up toxic chemicals that are leeching into the ground and water.

After eight years of working on those cases, he gets a surprise visit from his grandmother’s neighbor, a farmer named Wilbur Tennant (Bill Camp), who speaks with a near-indecipherable West Virginia accent but who is very upset because his animals have weirdly mutated organs and keep dying early. Oh, and his brother died, too, Bilott turns him down, but then, because of his grandmother, he agrees to look into it. He thinks it will be one and done. He’ll write a letter, work his contacts, and get some money to compensate Tennant, then go back to his nice partners and his nice office and his nice life, including Anne Hathaway as his wife who has the usual thankless task for a wife in these films of telling him he is working too hard and neglecting his family and his health.

I love movies about courageous lawyers fighting The Man; movies like that are part of the reason I became a lawyer in the first place. But it is no secret that while fiery courtroom battles are wonderfully dramatic, especially if there are many opportunities to yell “I object!” and even more especially if the cross-examination is so devastating that the bad guy actually confesses. But law — even in court — is not actually like that, and in translating this story to the screen, they made a few mistakes.

First, the legal issues themselves are complicated and arcane. Unless you are a lawyer you don’t want to and don’t need to know why Bilott ends up representing different clients about halfway through, but for the purposes of dramatic storytelling it is confusing and distracting. The same goes for why the chemical in question, used in the creation of the wildly popular no-stick Teflon cookware, was not covered by EPA regulations concerning its production and disposal.

Most significantly, though, Ruffalo and director Todd Haynes have stripped away a significant proportion of what makes their work distinctive in what looks like a mistaken opinion that style is not serious. Haynes, whose early film “Safe” was a provocative, stylish, and very serious drama about chemical exposure, should know that what he can bring to a film like this will only make it more compelling. The same goes for Ruffalo, who has turned the pilot light down low on his considerable charm as a performer. That may work in court; it is not effective on screen.

This is an important story and worth seeing. Its most powerful moment comes near the end, not in the courtroom but in a gas station (check the credits for that actor’s name.) More of that and the movie could have and should have been better.

Parents should know that this film has some very disturbing images showing the consequences of exposure to toxic chemicals, including mutations of humans and animals and some strong language.

Family discussion: What made Bilott change his mind about helping Tennant? Whose job is it to prevent this kind of damage and why wasn’t it done?

If you like this, try: “Erin Brockovich,” “A Civil Action,” and “Promised Land” 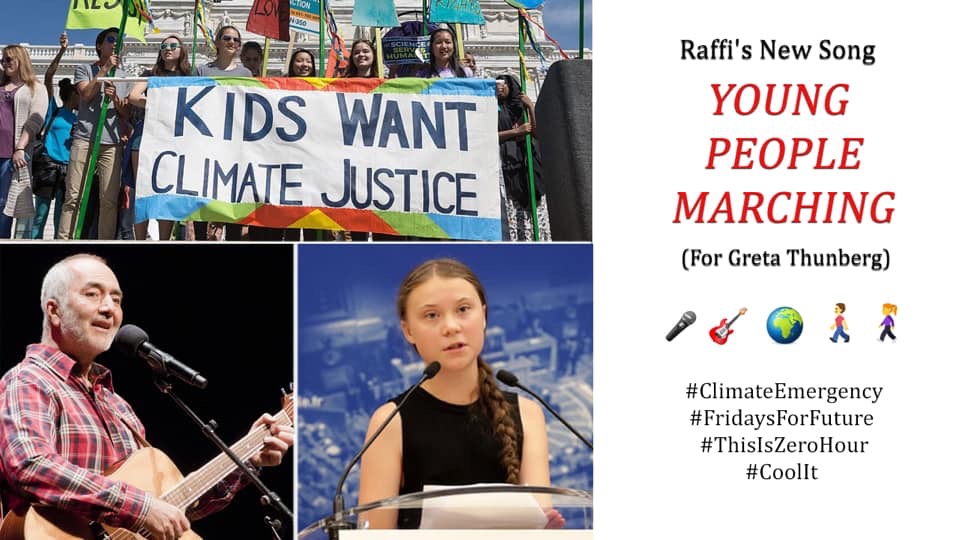 Raffi’s New Songs About the Climate/Environment

Raffi has been making families happy with his wonderful songs so long that today’s parents can remember singing along with Raffi with their own parents, probably songs like “Baby Beluga” and “Going to the Zoo.”

His two new songs address his concerns about climate change in a tuneful, frank but hopeful way. “Young People Marching” is a tribute to Greta Thunberg, the 16-year-old Swedish climate activist who inspired climate marches by young people around the world. The song begins with her trademark clarity: “There is no middle ground when it comes to the climate and ecological emergency!”

“Do We Love Enough” is a melodic ballad that asks some tough but essential questions that we now face. “With our future in jeopardy … how can the kids dream and plan? … Will we do enough?”

These powerful songs mark an evolution in Raffi’s decades long advocacy for children and the Earth, and in the call for climate action heard in his 2007 song “Cool It.”

In a 2017 essay for NBC news, Raffi wrote, “Kids born today will face unprecedented global crises within their lifetimes, including the possible collapse of fisheries, accelerated mass extinctions, decimation of coral reefs and rising sea levels… Finding a remedy for our species is a matter of survival.”

Once called “the most popular children’s singer in the English-speaking world” (Washington Post) and “Canada’s all-time children’s champion” (Toronto Star), pioneering troubadour Raffi has spent more than four decades delighting successive generations of kids–and their parents– with his playful personality and timeless songs. In that time, he has recorded numerous gold and platinum albums and performed countless sold-out concerts.
Raffi has refused all commercial endorsement offers and has never advertised to children, a distinction for which he received the Fred Rogers Integrity Award. His non-profit Raffi Foundation advances Child Honouring as a universal ethic. An online course in Child Honouring is now offered for parents, educators and policy makers.

“Young Greta is the moral voice of our times,” says Raffi, “urging the world to action on the global climate emergency, the greatest threat to all our lives—a matter of survival.”

Stream “Young People Marching” and “Do We Love Enough?”

Jennifer Lawrence narrates this documentary that shows us our planet as seen from outer space. 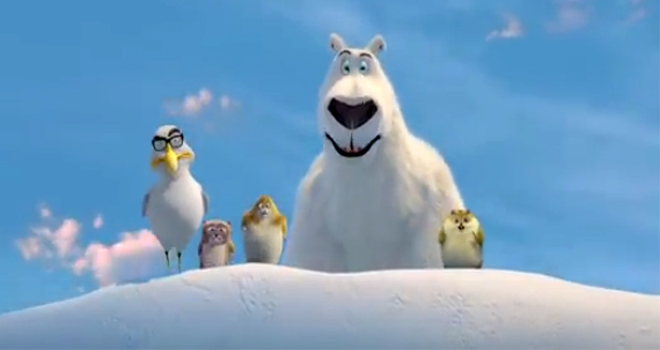 Norm of the North

“Norm of the North” is not awful, but it is also not special, not new, not funny, and not that interesting. The script is over-plotted but under-written, with confusing detours and uneven tone. It’s as though instead of coming up with an actual story the writers tried to assemble a formula from successful animated films — Cute sidekicks! Potty humor! Evil developers who want to despoil pristine environments! Random musical number! Wise advisor! A hero who is a clumsy outsider with a lot of heart! And a rescue! However, it also includes weirdly off-key or unresolved elements. There are actual stories to be told about the damage to the arctic environment and the potential for kids to make a difference in real life, but we’re going with condo developers and corrupt officials as the bad guys? And the issue of hunting other animal characters for food is clumsily handled. Kids may be reassured that Norm does not kill the sea lions, but he is not a vegetarian.

There are a couple of funny lines, but most of the wit of the movie is at the level of “I put the soul in winter soulstice!” “Who needs a bear with too much care and not enough scare?” Plus macho posturing, extended peeing into a fish tank, and a Nancy Pelosi “joke.”

Norm (Rob Schneider, who is quite good in his best-ever movie role) is a kind-hearted polar bear from the arctic who does not fit in because he is a poor hunter and not like the others. Both of these qualities relate to his ability to understand and speak “human” — meaning English. His wise and loving grandfather (Colm Meaney) has the same gift.

Norm’s arctic home is a popular site for tourists, and the animals appreciate tourism as it helps keep their home safe. If tourists want to come see the natural environment, then it will have to be kept as it is. But there is a developer named Mr. Greene (Ken Jeong) and we know he’s a bad guy because he has a dinky ponytail and yells a lot — and, of course, because he is a developer, who wants to build luxury homes for one-percenters on the polar icecap. Norm stows away on Mr. Greene’s company plane to come to the big city and stop the development. Accompanying him are three little arctic lemmings, whose primary characteristics are un-crushable resilience and public bodily functions.

Mr. Greene has a head of marketing, a single mom named Vera (Heather Graham). She is not entirely sure that the development is a good idea, but she desperately wants her daughter to get into a private school for gifted children, and Mr. Greene, as a graduate of the school, has promised an all-important recommendation if the development deal goes through. (The fact that the school produced a nutty crook like Mr. Greene does not cause her to question the school’s indispensability for her daughter.) It is a shame to hear the wonderful actress Salome Jens very briefly as a corrupt official, just there to look witchy and be bribed into approving the development.

It does not make much sense to try to explain the concept of distracting the populace with entertainment “bread and circuses” to children when the movie is a poor example of exactly that idea.

Family discussion: Why did Vera go along with Mr. Greene’s plan? What is the best way to protect the Arctic? How did the lemmings help Norm?

If you like this, try: the “Madagascar” movies and “Surf’s Up” 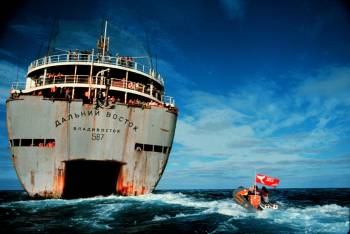 In Theaters For One Night Only: How to Change the World

How to Change the World, the critically acclaimed, award-winning documentary, comes to select U.S. theaters this September 9, 2015 at 7:30 p.m. local time, presented by Fathom Events and Picturehouse Entertainment. The documentary looks at the very early days of the modern eco-movement. Using never-before-seen footage, it tells the gripping story of a courageous group of men and women, led by Robert Hunter, who set out to change the world and in the process sparked a revolution.

The event will include an exclusive live Q&A from the London premiere event hosted by respected broadcaster and journalist Mariella Frostrup. The panel will feature legendary fashion designer and longstanding Greenpeace supporter Vivienne Westwood, director Jerry Rothwell, Hunter’s daughter Emily Hunter and other special guests to be announced.